Main / Books / Bottle of Rum: A History of the New World in Ten Cocktails

Bottle of Rum: A History of the New World in Ten Cocktails

By Wayne Curtis, Somewhat Contrived Premise, But You'll Learn A Lot About Rum

Yo, ho ho … and you’ve all heard the rest. But contrary to what the title of this novel would indicate, author Wayne Curtis maintains that rum and its history is a lot more than pirates, grog and 50 Cent throwing back Bacardis in da’ club.

And a Bottle of Rum: A History of the New World in Ten Cocktails takes us from rum’s first appearance in a cocktail in Barbados, to its upsurge during the Prohibition as the daiquiri (which later became one of Hemingway’s favorite drinks), to its current incarnations.

Curtis writes, “Rum didn’t necessarily change history, but history certainly changed rum, and if you but look you can see all of us reflected in each variation.” One chapter, one cocktail, and in between, Curtis rests briefly on such key collisions with history as Paul Revere downing a dram of rum during his midnight ride.

Unfortunately, the premise of cramming U.S. history into a cocktail glass is more gimmicky than helpful, especially when this book is more about rum than it is about history.

Although Curtis’ writing has the smoothness of well-aged liquor, drinking alcohol is simply more fun than reading about it. A lot of the information in And a Bottle of Rum isn’t mainstream enough to be practical – does anyone really care how many distilleries there were in the colonies? – and isn’t quirky enough to be interesting except to the most zealous of rum enthusiasts.

However, there are a few notable exceptions, and the author draws some interesting conclusions. Curtis debunks the notion of the Triangular Trade, which refers to the “rum-to-slaves-to-molasses” pattern of trade in the 18th century, that most people have been spoon-fed at some point prior to middle school. Curtis details how no shipping records indicate any single ship having completed all three legs of the trade.

He also explains that grog wasn’t actually consumed by pirates. Pirates, as the famed drunkards they seem to have been, wouldn’t have diluted their rum by adding water. Grog is essentially one part rum and three parts water – with a hint of lime to prevent scurvy. Instead, the British Royal Navy and an admiral who wore a coat made of something called “grogram” are responsible for the drink.

The author is clearly a rum aficionado: Packaged cocktails (e.g. no fresh ingredients) and candy-flavored rums get a condescending sneer from this writer who spent three years researching and sampling his drink of choice.

To that extent, Curtis’ opinions on the current brands and variations of rums on the market may have made this novel more useful as a bartender’s handbook. In the author’s defense, he does tack on some 30 or so cocktail recipes in the book’s appendix. Curtis also notes that Zapaca, a superpremium rum, “is considered by many who can (and do) argue at length over such things to be the best commercially available rum today.”

And finally, for a cocktail that caters toward the Emory palate, chapter eight is entitled Rum and Coke: “Place one-and-a-half ounces rum into tall glass with ice cubes. Fill with Coca-Cola. Garnish with a slice of lime. Repeat until well intoxicated.” 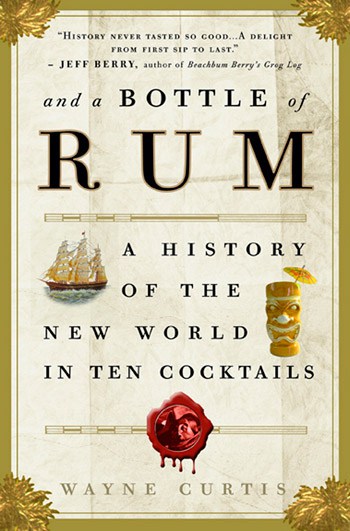 From the Publisher
And a Bottle of Rum tells the raucously entertaining story of America as seen through the bottom of a drinking glass. With a chapter for each of ten cocktails—from the grog sailors drank on the high seas in the 1700s to the mojitos of modern club hoppers—Wayne Curtis reveals that the homely spirit once distilled from the industrial waste of the exploding sugar trade has managed to infiltrate every stratum of New World society. Awash with local color and wry humor, And a Bottle of Rum is an affectionate toast to this most American of liquors, a chameleon spirit that has been constantly reinvented over the centuries by tavern keepers, bootleggers, lounge lizards, and marketing gurus. Complete with cocktail recipes for would-be epicurean time-travelers, this is history at its most intoxicating.
Show More
See it on
Share This
social & email
New Reviews
recent releases
New Posts
recently posted
Discussion and Replies