By Trevor Noah, An engrossing and raw autobiographical story of Trevor Noah's childhood in South Africa

I remember when Jon Stewart was leaving the Daily Show and Trevor Noah was announced as the new host. I liked his accent, but sort of assumed the show was basically dead.

But the show is actually still really good (and better sometimes). However, even if you watch The Daily Show with Trevor Noah consistently, you’ll probably be surprised by his stories in his memoir.

Born A Crime, by Trevor Noah, is about Noah’s childhood in South Africa when apartheid was still in effect. He grew up poor and mixed-race in a country where miscegenation laws, which prohibit the mixing of different racial groups through marriage or procreation, were active.

Much of the book is about the difficult decisions his mother had to make, him wrestling with his identity as a mixed-race kid and him dabbling with crime as a kid.

See Born A Crime on Amazon.

Trevor Noah is a comedian, so you’d expect the book to be funny, which it sometimes is, but mostly just sort of eye-opening stuff. Here’s a clip of him doing stand-up about his time in South Africa, but the tone of the book is a more serious compared to that clip.

I remember studying about apartheid briefly in school, but not in a meaningful way. It was very much a situation where I memorized a blurb about it from a study guide, regurgitated that information on some test, and that’s was pretty much the extent of my understanding about apartheid.

Noah’s stories about apartheid come instead from a very personal level. He recalls how the government essentially used institutionalized racism as a tool of oppression. By dividing people up and turning them against each other, they were able to deflect criticism and opposition to themselves. He notes how race was used as a tool of social power — a colored person could “become” white if the government deemed them worthy or “become” black if they got on their bad side.

Easily, the best parts of the book were about Noah’s experience as a bi-racial person in South Africa, the attitudes of people there about race and the day to day impact of apartheid in South Africa. Beyond the effects of apartheid from a societal perspective, Noah discusses how it affected his life and his identity. He explains his social isolation due to his racial status, how lonely it could be and how it taught him to be alone.

Noah’s stories are nuanced, personal and textured. His background is atypical to say the least, and it’s clear that in telling his story that he’s had to sort through and process a lot of personal baggage.

The most powerful story comes at the end and has to do with his mother who is the figure that looms over this book and is easily the hero of this story. Throughout the book, he talks about how she raised him, but also about her experiences with domestic abuse. The story is raw and emotional, and it’s worth reading this book for that story alone.

Born A Crime on Audiobook

Born A Crime is the first book I’ve ever fully listened to via audiobook. I finally caved and signed up for audible, though I’m not sure if I’ll stick with it. I’ve tried listening to other audiobooks, but often end up switching to the print version partway through.

I love Trevor Noah’s accent, and obviously he’s good at telling stories since he’s a comedian, but for this story especially, he works in a lot of accents and is able to show off his knowledge of a wide range of languages in use in South Africa. While the book is great even without it, the authenticity of the dialogue adds a lot of personality and texture to the story.

That said, this review has taken me a long time to write. I actually finished the book a few months ago, but had trouble writing the review until I finally fetched the book from the library. I find my comprehension feels fuzzier, and it’s a lot harder to double-check stuff for accuracy when it’s on audiobook.

The book has a decent amount of stuff about shenanigans of the little boy or teenage kid variety, probably like a quarter of it. It’s stuff like boys having crushes on girls, getting into trouble for being mischievous, or finding ways to make some cash on the side. While he makes some good observations about poverty and crime and why poor kids are susceptible to crime, overall, these parts of the book were fairly run-of-the-mill stories that I didn’t have a huge interest in.

Another thing that dampened my enthusiasm of the book was that it was revealing about how Noah sees women, but not in a positive way. When it comes to girls he had crushes on, he only talks about their appearances. She was so gorgeous. Or, she was stunning. And oh, I can’t believe I was going to the dance with someone this beautiful.

There’s a whole chapter that’s basically how he “dated” a super hot girl for a month until he realized she didn’t speak English. He had never spoken to her enough to figure it out. He recounts this as a funny anecdote and chalks it up to his ineptitude with women.

There’s also a weird bit about him and his friend giving loans to moms with pretty daughters in order to be able to “trade” time with those daughters in exchange for forgiving the debt. He cites it as an example of his business prowess, and justifies it by saying the girls were “usually thrilled to escape their mothers’ prison”, but I’m skeptical. Also, “usually”? What happened when the girls weren’t “thrilled” about it?

Listen to it! So much of this book is fascinating enough that I would recommend it despite any mild criticisms I had. His narration is fantastic, and the story sheds light in a funny and insightful way on a part of modern history most people aren’t aware of.

I think most people could get something from this book, whether it’s because of the substance or the humor or the parts about apartheid or the stories about his mother. It’s one I’d recommend to people who don’t typically read non-fiction (and for sure to anyone who does). And definitely consider getting the audiobook version.

See Born A Crime on Amazon.

Have you read this (or listened to it)? Share your thoughts below! 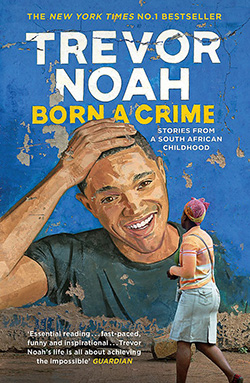 From the Publisher
Trevor Noah’s unlikely path from apartheid South Africa to the desk of The Daily Show began with a criminal act: his birth. Trevor was born to a white Swiss father and a black Xhosa mother at a time when such a union was punishable by five years in prison. Living proof of his parents’ indiscretion, Trevor was kept mostly indoors for the earliest years of his life, bound by the extreme and often absurd measures his mother took to hide him from a government that could, at any moment, steal him away. Finally liberated by the end of South Africa’s tyrannical white rule, Trevor and his mother set forth on a grand adventure, living openly and freely and embracing the opportunities won by a centuries-long struggle. Born a Crime is the story of a mischievous young boy who grows into a restless young man as he struggles to find himself in a world where he was never supposed to exist. It is also the story of that young man’s relationship with his fearless, rebellious, and fervently religious mother—his teammate, a woman determined to save her son from the cycle of poverty, violence, and abuse that would ultimately threaten her own life.
Show More
See it on Amazon Book Depository