By Sarah Vowell, An Irreverent Road Trip Through Presidential Assassinations

“Going to Ford’s Theater to watch the play is like going to Hooters for the food,” writes Sarah Vowell in Assassination Vacation.

But that’s where Vowell was, ironically watching Stephen Sondheim’s musical Assassins! And that’s where she begins her irreverent road trip, visiting the places where three American presidents have been assasinated over the years. The sites she visits are all connected to “presidential death magnet” Robert Todd Lincoln, who has the unfortunate distinction of being present at the killings of three U.S. presidents: James Garfield, William McKinley and his father, Abraham Lincoln.

But the novel’s grim premise turns out to be a thinly veiled excuse for Vowell to go road tripping. She visits all types of places dubiously connected to her theme of presidential death – from the mountain Theodore Roosevelt was scaling when McKinley died, making Roosevelt president, to a Philadelphia museum enshrining a piece of the thorax of John Wilkes Booth. In Assassination Vacation, the rule of thumb seems to be, the more bizarre the location, the more compelling the story behind it.

Throughout Vowell’s pilgrimage through presidential death, she plays the tour guide, pointing out all sorts of obscure points of interest. She blends popular culture references and travel commentary with her signature droll, deprecatory wit. It’s a glossed-over view of history – presidents are glorified and assassins reduced to comical figures, as per the Sondheim musical.

But historical analysis is not Vowell’s aim. As in her last book, The Partly Cloudy Patriot, you’ll recognize the trappings of your U.S. history course, but this book is not just for history buffs. Vowell spotlights the saucy details that fall to the wayside in classrooms. And just as her faux history lessons become too heavy-handed, she starts poking fun at historical figures like Garfield’s assassin, Charles “I-put-the-ass-in-assassin” Guiteau.

Assassination Vacation‘s macabre premise is understandable coming from an author who’s nickname was once Wednesday – as in Wednesday Addams from the Addams family. Vowell is the best sort of tour guide. There is no trace of intellectual elitism, just curiosity and a fine-tuned ability to detect irony. She is quick to mention how Garfield’s death marker, a plaque next to someone’s garage, was the result of a petition by a 12-year-old boy, and is playful when she sets off an alarm in Abraham Lincoln’s home as she jumps up to see her face in what was once Lincoln’s shaving mirror.

Vowell’s mishmash of random trivia proves to be a bit of a tease, however – fun, but ultimately inconclusive. The novel peters out, reaching a vague conclusion that’s disappointingly obvious. In the end, the fragments of Vowell’s novel dangle tantalizingly close together.

It’s a whimsical novel – some might call it bizarre – littered with moments of insight: “Presidents and presidential assassins are like Las Vegas and Salt Lake City,” writes Vowell, “Even though one city is all about sin and the other is all about salvation, they are identical, one-dimensional company towns built up out of the desert by the sheer will of true believers. The assassins and the presidents invite the same basic question: Just who do you think you are?” 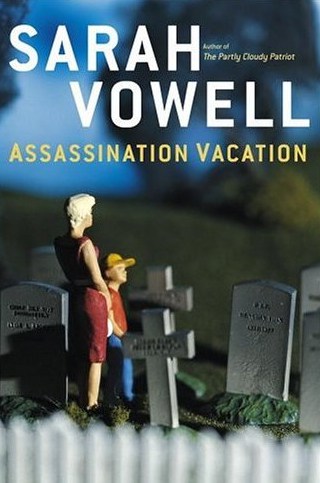 From the Publisher
A tour of key historic sites in America where incidents of political violence have occurred reveals lesser-known points of interest pertaining to each and shares information about how history has been shaped by popular culture and tourism.
Show More
See it on
Share This
social & email
New Reviews
recent releases
New Posts
recently posted
Discussion and Replies