By Kurt Vonnegut, A Posthumous Collection of Essays on War and Peace

And how should we behave during this Apocalypse? We should be unusually kind to one another, certainly. But we should also stop being so serious. Jokes help a lot. And get a dog, if you don’t already have one.

Whenever strangers or acquaintances ask me who my favorite writer is, I always say Kurt Vonnegut. To be honest, it’s not entirely true, I like him a lot, a lot, but I like a lot of writers equally. But he’s sort of an acceptable answer to everyone, not too pretentious, not too lightweight, so if I don’t know someone particularly well, I find it to be a safe answer.

Anyway, my point is, I like Vonnegut. A lot. Reading a Vonnegut novel is like hanging out with a funny, grouchy old dude that’s full of wisdom and makes inappropriate jokes from time to time. He’s that janitor character in movies that hands out epiphanies about life.

However, Armgageddon in Retrospect was compiled by his son, Mark Vonnegut, and published posthumously. As a result, it’s sort of what you’d expect from a book that hasn’t been vetted by the author, that’s full of the last pickings of whatever hadn’t made it to the publisher yet.

Still, even the last pickings of Vonnegut are better than some people’s life’s work, though these essays and stories are really not that great. Some of them were very obviously not meant to be published. This collection in particular focuses on his musings about war and life (Vonnegut was a veteran who fought in World War II). Like much of Vonnegut, it’s all over the place and random and insightful. Sometimes he’s sad, sometimes he’s funny. He’s angry at the world for it’s many shortcomings, but wants to love it anyway.

Most of it is fictional, some of it is coming straight from him. Vonnegut is firmly anti-war though. Not pacifist, but close to it. So that’s what this collection is mostly about. But, like I said before, it’s not his best work. This is not a good book to discover Vonnegut.

If you’re new to him, try Slaughterhouse V or Cat’s Cradle instead. If you’re a Vonnegut fan, you’ll probably like parts of it out of some sense of nostalgia. If you’re somewhere in the middle, unless you are particularly interested in anti-war books, you’ll probably prefer something else. This material is really covered better (and more eloquently) in Slaughterhouse V, so definitely, definitely read that classic instead if you haven’t already. 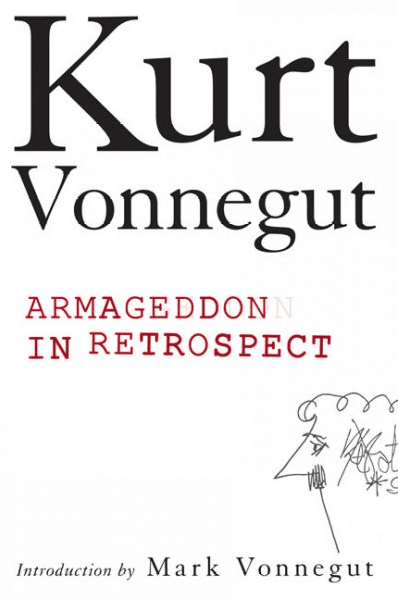 From the Publisher
Armageddon in Retrospect is a collection of twelve previously unpublished writings on war and peace. Imbued with Vonnegut's trademark rueful humor and outraged moral sense, the pieces range from a letter written by Vonnegut to his family in 1945, informing them that he'd been taken prisoner by the Germans, to his last speech, delivered after his death by his son Mark, who provides a warmly personal introduction to the collection. Taken together, these pieces provide fresh insight into Vonnegut's enduring literary genius and reinforce his ongoing moral relevance in today's world.
Show More
See it on
Share This
social & email
New Reviews
recent releases
New Posts
recently posted
Discussion and Replies