Main / Books / Against the Day

By Thomas Pynchon, Congratulations on Getting Through This Book

Pynchon fans are overwhelmingly male, and I’d imagine that they are likely pretentiously intellectual and cluelessly boorish. It takes dedication to get through Against the Day. (Anyone who says otherwise is either full of shit or did not actually read it or some combination of the two, and you should be immediately skeptical of anything they say.) Beyond it’s sheer length, the novel has a purposefully uncoordinated structure, littered with lengthy non-sequiturs and passages describing faux science, and the vocabulary is frequently and intentionally arcane (and in some instances completely made-up). Instead of a cigar, they light up a “panatela”; instead of riding in a coach, they ride in a “charabant”; instead of the meat having bits of cartilage in it, there are bits of “gristle”; it’s not a swimming pool, but a “natatorium”; he’s not a travel guide, but a “cicerone”; the color is not bluish-green but “glaucous”; she’s not an Ottoman slave, but a “odalisque”; it’s not a dry creek, but an “arroyo” — you get the picture. Characters, locations and fake scientific terms and random unexplained proper nouns come flooding at you at an alarming rate, and the novel quickly shifts and turns in its tone, style, narrative and storylines at a rapid click.

I’m sure other opinions differ on this type of thing, and some find it enthralling, but I’m never all that impressed by this type of thing. I find it a little obnoxious. To be fair, the ability to combine all these things, the fantastical characters, the array of literary styles, the esoteric source materials, the shifting tones, the jumble of narrative storylines, and on and on — even as flawed and conflated as the resulting mixture is, it’s undeniably a difficult task and the final result is at least mildly impressive. It’s indisputable Pynchon is a smart dude (though, I suspect not as smart as he considers himself to be), he’s just not someone I’d want to spend an afternoon with.

To be fair, the novel is not entirely without its charms. I begrudgingly had to smirk at Pynchon’s high-handed version of a “yo’ momma” joke: “…your maternal relations, Suckling, one glimpse of whom should prove more than sufficient fatally to compromise their morale, if not indeed transform them all into masonry–” (Translation: Your mother’s so ugly one look at her is enough to demoralize and turn mem into stone.)

To me, reading this novel is the literary equivalent of buying a Faberge egg. You buy them to show that you can and that you have money. Similarly, you read this to say you can and to prove your literary street cred. The only real gratification I have from slogging through this 1,085-page Pynchonian tome is that of being able to tell other people that I successfully slogged through a 1,085-page Pynchonian tome. Also, I now know the term for a boy that gets sodomized by a man (calamite). But for both of these things, the only meaningful response any reasonable person should have is an emphatic “so what?”

P.S. If you are looking for a review of this book that focuses on the substance better than I do here, I’d recommend this New Yorker review which I generally agree with. 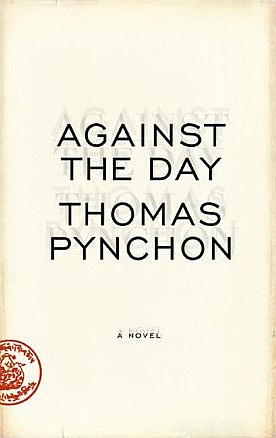 From the Publisher
The inimitable Thomas Pynchon has done it again. Hailed as "a major work of art" by The Wall Street Journal, his first novel in almost ten years spans the era between the Chicago World's Fair of 1893 and the years just after World War I and moves among locations across the globe (and to a few places not strictly speaking on the map at all). With a phantasmagoria of characters and a kaleidoscopic plot, Against the Day confronts a world of impending disaster, unrestrained corporate greed, false religiosity, moronic fecklessness, and evil intent in high places and still manages to be hilarious, moving, profound, and so much more.
Show More
See it on
Share This
social & email
New Reviews
recent releases
New Posts
recently posted
Discussion and Replies