A Court of Thorns and Roses Hulu TV Series: What We Know

A Court of Thorns and Roses is the first book in an a epic fantasy romance series, involving retellings of fairy tales and faerie lore. The series currently has six planned books in total, with two additional novellas and other extra content as well.

A Court Of Thorns And Roses , described as a loose retelling of Beauty and the Beast, offers an epic narrative that blends romance, adventure, and political intrigue. Feyre is a human huntress who gets on the wrong side of the faeries when she kills a Fae in wolf form.

As a result of this act, a life for a life is demanded. Feyre ends up agreeing to be imprisoned in a faerie realm with a faerie lord, Tamlin, in return for her family’s safety. When she falls for Tamlin, it ultimately results in a fight for that love as an ancient curse threatens to destroy the faerie and human realms.

The first book in the series (A Court of Thorns and Roses) was originally published in May 2015.

What format will it be? Will the A Court of Thorns and Roses adaptation be a Movie or a Series?

It’s planned as a television series, to be available on Hulu. It looks like there are tentative plans to adapt the entire series into what will likely be multiple seasons.

In January 2022, Craig Erwich, President of Hulu Originals & ABC Entertainment commented about the series: “The books are a great roadmap for what I think will be a very successful series. I haven’t read the material yet, although I’m very aware of a lot of the conversations going on with the show. Ron [co-writer of the screenplay] is truly one of the visionaries of that genre.”

Hulu is developing the fantasy series, to be aired on their streaming service. The project is being co-adapted by Ron Moore, who also adapted the Outlander book series for TV and author Sarah J. Maas.

Maas will also serve as an executive producer for the show.

What’s the status of the A Court of Thorns and Roses adaptation?

The adaptation seems to be in active development. According to an update on IMDBPro, the adaptation may have starting filming (or at least set a date to begin filming) as of October 24, 2021. (Note that I don’t know if this is an error or something since it doesn’t seem to be reported anywhere else.)

As a fun side note, the announcement about the project was actually initially leaked by accident by Josh Maas (Sarah J. Maas’s husband) over an Instagram photo of a sandwich — see the development timeline below for details & the photo! 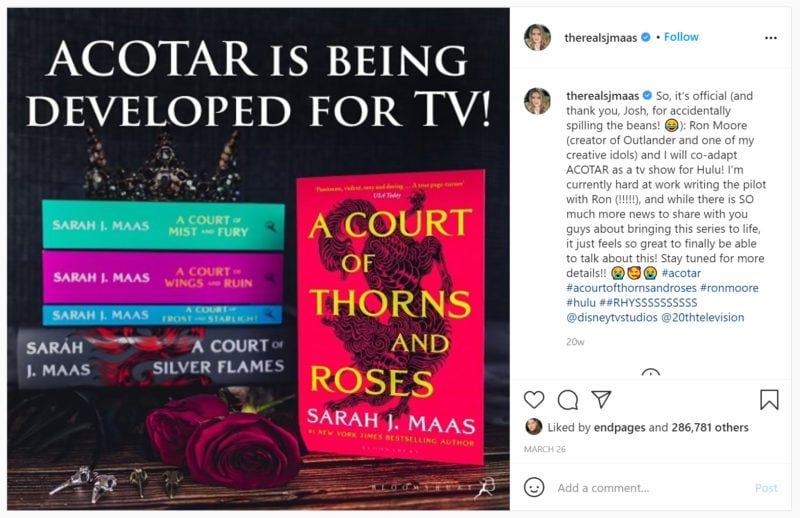 March 26, 2021 ‘A Court Of Thorns And Roses’ Series accidentally leaked by Josh Maas (Sarah J. Maas’s husband) via instagram — you can see the script labeled “TV adaptation notes” in the photo he posted of a sandwich below. 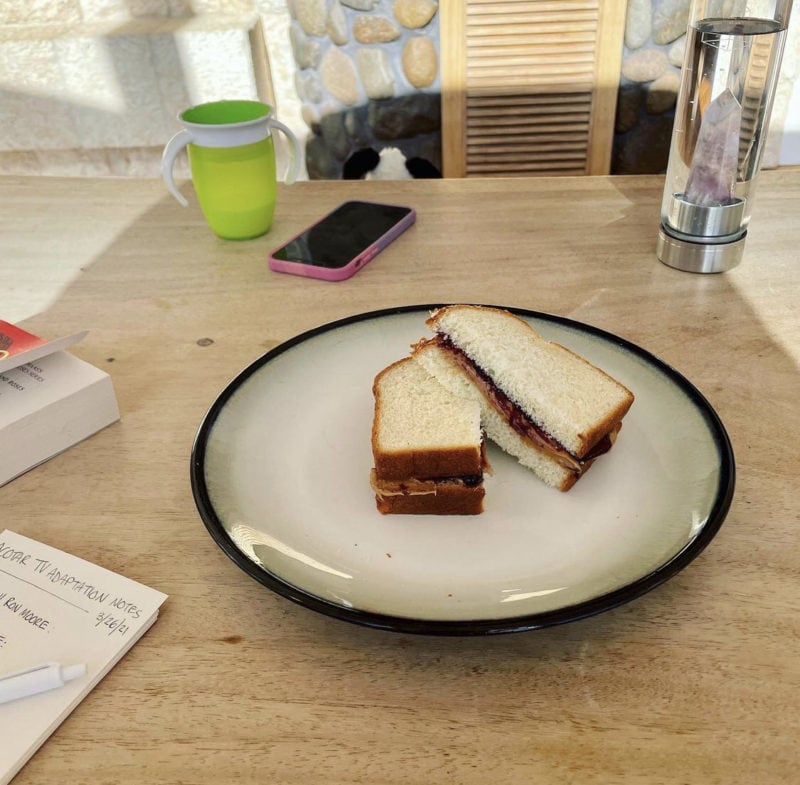 In response, Sarah J. Mass commented on her own Instagram “So, it’s official (and thank you, Josh, for accidentally spilling the beans!): Ron Moore (creator of Outlander and one of my creative idols) and I will co-adapt ACOTAR as a tv show for Hulu”

March 26, 2021 ‘A Court Of Thorns And Roses’ Series Based On Fantasy Books In Works At Hulu From Ron Moore & Sarah J. Maas

June 15, 2021 It appears some version of the script has been completed (in some form).

October 24, 2021 A Court of Thorns and Roses may have started filming or at least set a date to start filming (according to IMDBPro). (Note that I don’t know if this is an error or something since it doesn’t seem to be reported anywhere else.)